To add a favourite, simply click the
when viewing our homes 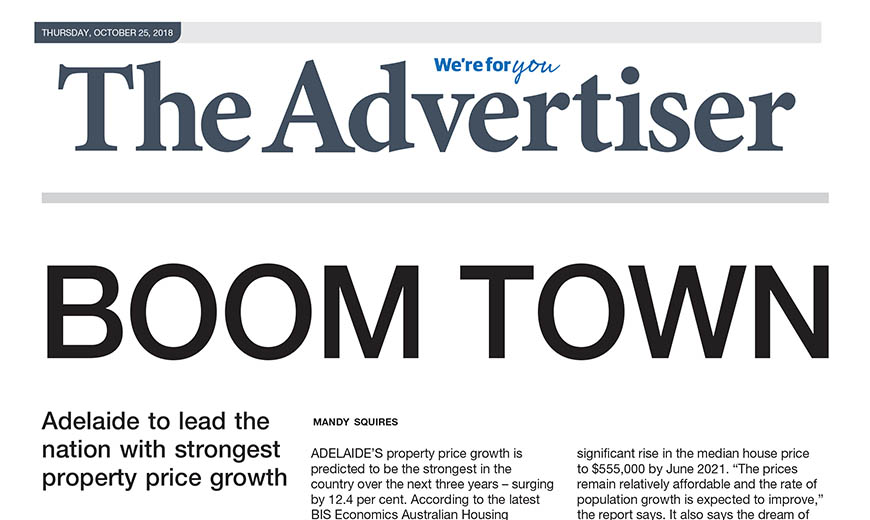 Adelaide to lead the nation with strongest property price growth

ADELAIDE’S property price growth is predicted to be the strongest in the country over the next three years – surging by 12.4 per cent. According to the latest BIS Economics Australian Housing Outlook, the positive forecasts of market affordability and low interest rates make Adelaide the national hotspot. Also, the report says a crucial dip in the jobless rate to5.6 per cent and a boost in “defence and infrastructure spending” will lead to a signifcant rise in the median house price to $555,000 by June 2021.

“The prices remain relatively affordable and the rate of population growth is expected to improve,” the report says. It also says the dream of home ownership is alive and well, with first home buyers surging into the housing market at the highest levels in a decade after years of being pushed out by investors.

Adelaide’s houses on the upturn

QBE Lenders’ Mortgage Insurance chief executive Phil White said the rst home buyer market was the strongest it had been since the Federal Government’s post-GFC stimulus package delivered $1.5 billion to rst home buyers. Tighter lending standards for domestic investors and restrictions on international buyers, coupled with rst home buyer incentives, had made it easier for ordinary Aussies to enter the property market, he said.

The report says median unit prices are projected to rise by a slightly lower 6.3 per cent, making Adelaide the second strongest unit market after Hobart’s 9.3 per cent. The BIS report, which gives a three-year snapshot and forecast of the market, says in 017-18, units accounted for 34 per cent of total dwelling completions, compared to a long-term average of 25 per cent over the previous two decades. Without evidence of a corresponding increase in demand for this type of dwelling in Adelaide, it’s expected that the unit segment will be in higher oversupply than for detached dwellings.

While Adelaide saw a slight increase in the share of units compared with the eastern state capital cities, it was of a smaller magnitude. The report highlights the number of dwelling commencements are beginning to ease and “should remain suppressed for some time as the current excess of dwelling stock is progressively absorbed. “Overall, Adelaide’s median house price is forecast to grow by 12 per cent over the forecast period to reach $555,000 by June 2021, which will be a similar rate of price growth (4% pa on average) to that seen in recent years. The report, commissioned by international insurance giant QBE, shows despite rising property prices across much of the country, enthusiastic rst home buyers are pouring into the market and lending to them is at the highest level since 2010.

It also reveals housing prices are expected to keep rising over the next few years, with the exception of the two biggest property markets of Sydney and Melbourne, where prices will fall in 2019.Sydney prices, which have fallen 7.6 per cent already this year, are expected to fall another 3.5 per cent in 2019, before bottoming out in 2020 and then starting to rise again. In Melbourne prices have fallen 1.6 per cent this year and are tipped to dip a further 4.2 per cent next year before creeping up again. Much-maligned Millennials are proving the most inuential population group in the country’s property market, underpinning the boom in city apartment building. The ageing of the millennial population over the next decades is expected to create a new dynamic for the residential property market,” the report says.

Sign up for our news letter and get the latest news, special offers and industry tips